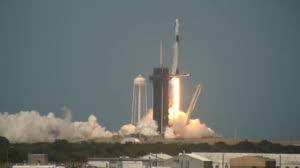 It was a familiar scene….Pad 39 A at the Kennedy Space Centre in Florida. Watching the countdown with anticipation as American astronauts sat atop a rocket that would ignite a fireball of fuel that would launch them into space. As the final seconds ticked away, there is always apprehension and worry that everything goes as it should. And when it does, it’s always a sight to behold. A sleek rocket soaring through the atmosphere and into space with humans on board. It seems that, no matter where you were watching or what nation you were watching it in, it brought you together with everyone else in a unified sense of joy, pride and wonder. And you would hope that it would somehow provide relief and hope to the crazy, unsettled world those astronauts were streaking away from.

This could easily describe watching the launch of the Space X mission to the International Space Station this past weekend. It was not only the first launch into space in cooperation with a private enterprise, but the first manned launch from American soil in 9 years. Yet it also describes, for me, watching another launch back in December of 1968. I grew up watching the Space Race between the US and then Soviet Union through the 60’s and on this December day, about a week before Christmas, Apollo 8 was about to take it’s three man crew beyond what any other space mission had done to that point, leaving earth orbit and heading to the moon. It’s mission was to reach and orbit the moon several times before returning to earth. It would set the groundwork for the Apollo 11 mission the following July. Watching the huge Saturn V rocket powering its way through the sky and into space was another unifying moment, for it too was leaving behind a world in turmoil, especially in the United States. Not only was a war half a world away tearing the country apart, the ongoing divide between black & white America was as deep as ever. Dr. Martin Luther King had been gunned down and, barely two months later, Robert Kennedy, the man who was on his way to winning the Democratic nomination for President, and probably would have become President, was also assassinated. Riots and demonstrations followed in the cities. Burning and looting occurred. There was a military presence in the streets. It seemed an entire nation lacked leadership, vision or hope as to how to resolve the chaos it was in. So, at the end of that tumultuous year of 1968, it was a magnificent adventure into space that brought a brief moment of celebration and hope to not only Americans but citizens of the world.

So, watching the launch of Space X over this past weekend, even though its destination was not as ambitious, was still a reason watch something hopeful and inspiring. Those two Americans were also leaving behind a world crippled and divided by a deadly pandemic and another senseless death that ignited the consistent flames of hate, racial inequality and injustice. Ironically, it is also during another election year, but also a time again when the situation cries out for thoughtful, reasoned leadership that’s not there. Again, there are demonstrations, some turning violent. There is looting. There is burning. And there is a military presence in the streets.

I have always been a huge proponent of space exploration, even though many, including back in 1968, thought of it as a waste of money that could be better spent fixing some of the problems causing all the unrest and turmoil. Yes, it’s a tremendous amount of money, but I feel money well spent. It has not only lead to opening up the universe but the development of technological change in all aspects of society. One just has to look at the astronauts suits. Gone were the bulky, cumbersome suits which made them look like the Michelin tire guy (and those portable air conditioners they had to carry with them?). Astronauts Bob & Doug (beauty, eh?) showed up in the sleekest, coolest suits this side of Star Trek. The Dragon space capsule was also a marvel of new technology. Gone were the multiple dials, switches and counters spread over a huge control panel which took up half the spacecraft. The Dragon’s control panel was like a interstellar version of a Tesla control panel, complete with video monitors and fingertip controls.

It may not have been boldly going where no man has gone before, but the Space X mission was the beginning of a new era in space exploration. It gave us a welcome reminder that humans can achieve great things and how far we’ve come from those early days of space exploration.

As to what’s going on back here on Earth, especially over the past week, its a sad reminder of what we can never seem to change, and how far we still have to go before we do.

A CFL RESET? I HAVE SOME SUGGESTIONS……
Scroll to top