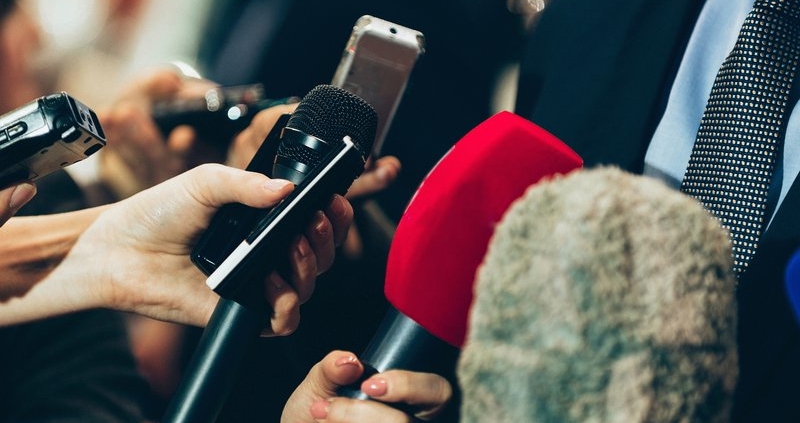 The media, journalists and those associated with it have been getting a pretty rough ride lately..and it has gone beyond just the average criticism that we’re either ‘pro this’ or ‘anti that’, to downright hostility and harassing behaviour.  Last month, a group of anti-tax, covid deniers confronted a group from a news service in Kelowna, calling them liars, complicit in hiding the ‘truth’ and saying they will all be tried and held criminally responsible at impending trials.  Recently, a colleague of mine was getting posts on her social media feeds from someone asking how she could be so naive and complacent on pretending everything in the world is alright, when the media is working to destroy our society and that she will surely face the consequences when the impending ‘trials’ take place.   There are other stories of camera operators and reporters who are constantly harassed and harangued by people calling them liars and spreaders of propaganda.  This goes beyond the usual level of mistrust and criticism, much of it not only implicit but threatening.  It has fuelled mistrust in the media to an all time high.  So much so that I’m noticing many people, who I usually consider rational, open minded individuals, echoing the same rhetoric and claiming they’ve always ‘mistrusted’ the mainstream media.  Much of this has been amplified by the pandemic and our collective impatience over how long it’s gone on and how our government’s have handled it.  But to subject your wrath against the media, which, believe it or not, is trying to get at the truth as much as you want, is misguided…and the treatment individuals are getting as a result is just wrong.  It’s one thing for us to react emotionally and passionately to these situations, but that doesn’t mean journalists or reporters don’t.  Many times they do, and earlier this week there was a good example of that.

Ben Miljure, one of our reporters at CTV Vancouver, was covering the story of the tragic discovery of the bodies of 215 children found buried on the grounds of the Kamloops residential school.  A horrifying story for everyone, but it became much more for Ben,   He was ready to do his live report that night from the steps of the Vancouver Art Gallery, where a memorial made up of 215 pairs of children’s shoes had been set up,  The anchor introduced Ben, who then started his report.  But instead of a stoic, somber explanation of the scene around him, his voice cracked with sobs and tears as he described what he was seeing.  What had happened was an awakening of emotions he had kept suppressed  for decades as he realized this was also a story about his heritage..a heritage he had been cut off and isolated from for his entire life.  It’s not for me to tell Ben’s story here, so I urge to go to ctvvancovuer.ca and read his story ‘I, Ben Miljure, am an indigenous man’   It is compelling, honest and insightful and, I hope, will give you an appreciation of how seriously and passionately journalists take their work.  There are many examples of reporters and anchors who have been overcome by the moments they report on.  Like many of them, Ben was honest, brave and has nothing to be ashamed of.  And for every one who has shown emotion on the air, there are a hundred times more who probably break down off the air.  Many reporters have had to witness tragedy, or spend time hearing the stories of those affected by it.  They go through court documents detailing horrific behaviour or tragic outcomes.   For others, it the challenge of trying to find the truth when dealing with governments, law enforcement, companies and organizations…all who spend a great deal of time and money trying to spin, manipulate and deflect the truth.

Now I know I’m not a journalist in any sense, but I have worked in radio and television newsrooms for over 40 years.  I have worked with many talented, top notch journalists like Ben and learned much from all of them.  Never, in all that time, have I ever seen any example of any reporter or news organization hiding, manipulating or manufacturing any kind of story or existing one to push either some political, corporate or personal agenda.  The only agenda is to get the facts, tell the story and how it relates to the viewer/listener/reader and how it will affect their world.   Sometimes we make mistakes,  Sometimes we get it wrong, but the good ones will always owe up to it and get it right.  It’s always been that way.  There are no daily conference calls with Justin Trudeau, Hillary Clinton, George Soros, Bill Gates and the Hollywood Illuminati,  Stories and scripts are not written & vetted and passed down to the anchor desk by our corporate masters to push their agendas.  Yes, we miss some things and we focus too much on the wrong things at times.  I; for one, would like to see more well reported, researched and developed stories, so one can assess and determine what they think, rather than have a panel of pundits sit around telling you this is what you should think.   But as I mentioned earlier, it is even more difficult for reporters today than at any other time.  They have less resources to work with and many now find themselves shooting, editing and filing their own stories as newsroom budgets shrink and staff gets trimmed. Not to mention deadlines, time constraints and the pressure to either get the story first, or get something the other guys don’t have.   To make matters worse, now anyone with an iPhone or video camera who wants to push an agenda or unrealistic idea can post a video online of any event or confrontation which suits their purpose and call themselves a ‘journalist.’  Most of the time, it seems their only motivation is attention.

The pressure to perform and produce is enormous.  The last thing any of them need is someone telling them they peddle lies, and therefore should be tried & imprisoned or called ‘the enemy of the people.   Nor should they be harassed for doing their jobs or what someone else ‘thinks’ they’re doing.

I’m not saying that the media should never be criticized and I know it always will be.  People will always react based on their own bias and beliefs…I get that.  But we have to return to a sense of reason, reality and rationality.   After all, we’re only human.