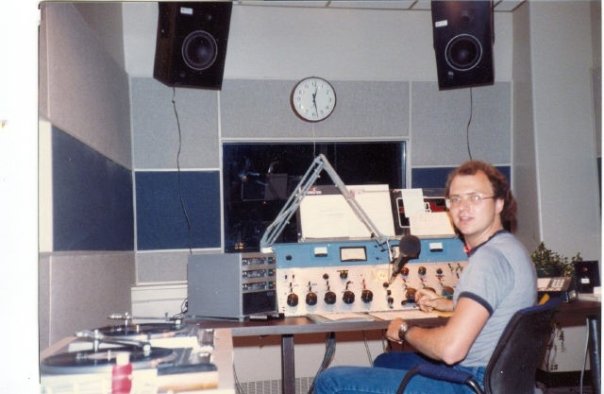 So there are two important anniversaries occurring this month. The most important, of course, is my 24th wedding anniversary to my wonderful wife Amandah. But the other is also significant.

It was 40 years ago this month when we packed up the family car with my stereo, record albums, a suitcase of clothes and a few other things as my father and I drove up to Sault Ste Marie, Ontario to start my broadcasting career. After sending out multiple tapes and resumes, I was off to do the evening shift at CFYN AM. Even though I had aspirations of working at a cool FM rock station, I had to start somewhere, even for a whopping $500 a month. My friends thought I was insane. Many of them were sure I would be enrolling in a theatre program or hitting the stage at Second City or Yuk Yuks. Why on earth did I want to do radio? I didn’t see it that way…I was getting a chance to do something I wanted to do. A couple of days later, we arrived and found a place to live…a small room in a house near the Algoma Steel Plant. I remember my Dad waking up early the next morning to say goodbye to me. Half asleep, I gave him a hug and he was on his way back home…and for brief moment, I found myself now alone…on my own. In that moment, I thought ‘What happens now? How is this going to go? What am I doing? Are my friends right, am I really insane?’

Once that feeling subsided, I went off to my first shift. That was followed by nearly a year there where I moved from evenings to mid-days and finally to afternoon drive. Then I was off to Saskatoon to work in the format I always wanted to do, FM rock radio. Five great years there were followed by an ownership & format change and another not so great 2 and half years before they had enough of me and I of them. Shortly after that, I found myself in the world of television at the newly launched STV. As strange as it my seem now. television was never on my radar. But here I was, with the same thought in my head from nearly 10 years earlier…’How is this going to go?’

As it turns out, I’m glad I didn’t know, because I could never have imagined how it was going to be so fulfilling, compelling, challenging, at times frustrating but always rewarding this journey was going to be. Along the way, I’ve met and worked with some incredible people. I’ve met the famous, not so famous and people who deserve to be more famous than they actually are. I’ve met some long time heroes and new ones. I’ve got to travel places I never thought I would be. I’ve performed in some great studios, stages and settings…been involved with some great productions. I’ve been part of some great fundraising campaigns and programs for some great causes and institutions. I flown with the Snowbirds and done live broadcasts from vineyards in France. I’ve been through 5 or 6 different corporate and ownership restructurings as well as numerous ‘changes in direction.’ I worked at 4 different TV stations in one building, I’ve been asked to leave buildings 3 times and watched helplessly when others were asked to leave. I’ve seen changes in technology, strategy and philosophy through the entire industry that, even now, it is still trying to come to terms with. But most of all, I have learned so much about myself, much more than I could ever imagine when I was sitting in the dark in that room in Sault Ste Marie.

Would I do it all again? Hell yes…even the $500 a month ( which I should say I make a lot more than that now). I know this a time of great angst and doubt in broadcast media these days. They way we get and receive information and entertainment is still something the traditional broadcasters are trying to keep up with, while the corporations who own and operate media keep their eyes on the bottom line. Many people who have been doing this as long as I have are now questioning if its all still worth it, while many who aspire to get in are now getting cold feet. I’m often asked nowadays whether I would encourage anyone to take up this profession. My answer again is…hell yes! There will be challenging moments and times when you doubt not only those around you but also yourself, but that happens to anyone in any profession. Broadcasting and media not only in this country but around the world needs new people with fresh ideas to help it evolve and change with how we communicate and get our information and entertainment. I think its up to everyone in the industry now to develop and encourage this.

I would also tell anyone who wants to do this is to always trust yourself and be yourself. Over the years, I have had many people tell me how to act, sound, emote and express myself. Yes, you can take some direction here and there, but in the end, it all comes down to being genuine and true to yourself. I’ve been put in situations where they’ve tried to turn me into someone I wasn’t. Needless to say, it didn’t work, even when it meant I was out of work. Now, forty years later, I can say I’m enjoying myself more than I ever have in my entire career. I’m still challenged every day, I’m still enjoying every day and I’m still thankful every day.

And I’m not done yet!